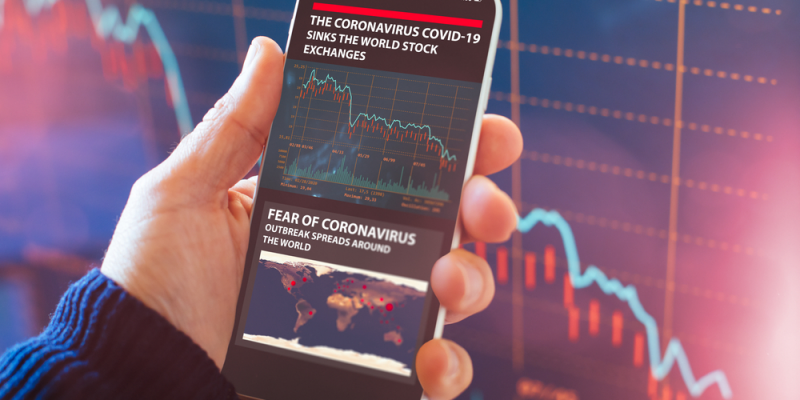 Investing.com — The fear of recession is set to drive U.S. stocks to fresh losses at the open, and data on jobless claims, existing home sales and manufacturing activity may all buffet them further. Bond yields are tumbling as the fear of recession outpaces the fear of inflation, while new reports add to speculation that year will end with positive interest rates in the Eurozone. Sri Lanka became the first sovereign debtor to default in 2022 – and it’s unlikely to be the last. Here’s what you need to know in financial markets on Thursday, 19th May.

1. A whiff of capitulation in stocks

There’s more than a whiff of capitulation in the air on Thursday, as U.S. stocks look set to extend Wednesday’s rout at the opening, unable to shake the fear of a slowdown, and even a possible recession, generated by this week’s poor earnings from the retail sector.

“Over the last couple of years, it is profit margins that have been the main driver of U.S. inflation rates, and so as markets come to consider what a lower inflation rate might mean, that may require a reassessment” as regards stock valuations, UBS Global Wealth Management’s Paul Donovan said in a morning briefing.

That puts the Dow and S&P on course to open at their lowest in 14 months, and the Nasdaq at an 18-month low. The mood is summed up by reports that Melvin Capital, a hedge fund famous for taking the other side of the meme stock bet last year, is winding itself up and returning cash to investors.

The economic calendar is quite capable of sending fresh shockwaves through markets later, with weekly jobless claims, existing home sales for April and the Philadelphia Federal Reserve’s monthly business survey all due.

The NY Fed’s Empire State manufacturing index and a drop in homebuilder confidence and in April housing starts earlier this week both augur badly for today’s numbers.

The Philly Fed and jobless claims are due at 8:30 AM ET, while the home sales data are due at 10 AM ET. Given the traditional relationship between profit margins and lay-offs, the retail sector’s warnings may mean that initial jobless claims start to head up from their current trend around 200,000 relatively soon.

By then, a bunch more retailers will have had the chance to either calm investors’ nerves or rattle them again. Kohl’s (NYSE:KSS), BJ’s Wholesale Club (NYSE:BJ) and Canada Goose  (NYSE:GOOS) are all due to report early.

If you want proof that investors are suddenly more afraid of growth than inflation, then take a look at the bond market.

Yields fell sharply on Wednesday in a rush of safe-haven buying, against a backdrop of comments from Federal Reserve officials all saying, in their various ways, that they are open to raising interest rates above the (somewhat nebulously defined) neutral rate in order to bring inflation down.

Eurozone long-term bond yields were also down across the board amid fresh reports that the ECB may be willing to raise interest rates three times before the end of the year. The euro held steady just above $1.05.

Sri Lanka formally defaulted on its foreign debt, buckling under a succession of external shocks and economic mismanagement that have left it with widespread food and energy shortages and rampant inflation. Inflation is set to peak at around 40%, central bank Governor Nandalal Weerasinghe told a briefing.

The South Asian island nation is the first country in two years to formally default on its debt but is unlikely to be the last in 2022 to do so, given the shock of surging global food and energy prices.

The country has already started debt restructuring talks with the International Monetary Fund. Their progress will depend largely on the attitude taken by China, whose state-owned banks are the island nation’s biggest direct creditors.

The news throws a spotlight on the decisions of Egypt’s central bank later, given that country’s dependence on foreign food and oil.

Crude oil prices retreated, amid the broad fear about global growth. News that China is in talks with Russia to buy oil for its strategic reserves also weighed on prices, in so far as it suggested that Russia’s supply won’t be entirely lost to world markets.

Opinion is also solidifying around the idea that the EU’s proposed sanctions package won’t in any case spell the total end of Russian exports to Europe, leaving European buyers having to cover a slightly less acute supply shortfall.

By Dragon’s Rock, world’s policymakers plot how to slay stagflation

GBP/USD Technical Analysis: Amid Rapid Collapse of Gains – 19 May 2022